Create Your Legacy at Walsh

You are at: Planned Giving > Gift Options > Donor Stories

Walsh Relationships: From the Classroom to the Altar 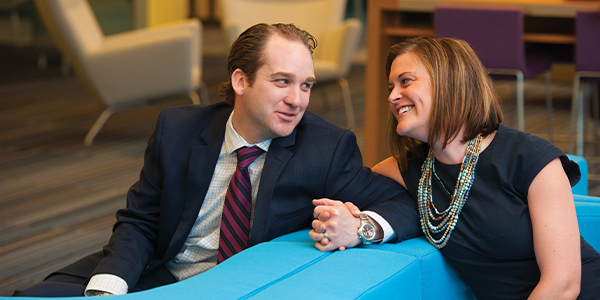 Kevin and Rebecca Hepner's personal relationship began while earning their MBAs at Walsh; they know their future includes a long-lasting relationship with the College.

Their relationship began by chance. They were both enrolled in the Master of Business Administration program at Walsh and taking an international business class. "It wasn't a typical class," Rebecca recalled of her first meeting with Kevin Hepner. "It was a social setting, like a field trip, and we had a chance to get to know each other."

What started as a chance meeting in that class has turned into a seven-year relationship, the last three as a married couple.

They are foster parents, successful professionals and avid travelers. Above all else, they have a mutual respect for one another.

"I love his work ethic," Rebecca said of Kevin. "I love how similar we are," Kevin said of Rebecca. "We love to travel; we love our dog; and we have a very good work-life balance." They now call themselves "Team Hepner." They are partners in every sense of the word. They even share a passion for their alma mater.

When asked where they see themselves in 10 years, aside from Rebecca's response of "celebrating our 13-year anniversary and raising our family," both mentioned having a deeper relationship with Walsh College.

"I'd like to teach at Walsh one day," said Kevin, who earned his BBA-FIN '02 and MBA '09 at Walsh College and is a financial advisor with TruVista Wealth Advisors. He was also recently appointed to the Walsh College Foundation Board.

"We are 'Walshies,'" added Rebecca, who also earned her BBA-MGT '04 and MBA '07 at Walsh and is the director of donor relations for The Salvation Army. "We would both like to support Walsh College at a higher level in the coming years."

Kevin and Rebecca are already members of the President's Club, the College's donor-recognition society. They are also both members of the Archie Waring Society, having designated Walsh College as a beneficiary of their estate plans.

The Hepners are a perfect example of the type of relationships that can be found at Walsh. They found each other, and they have found a profound respect for all that the College represents.

"I loved that I could keep building my career and earn my education at the same time," said Kevin. "And with four semesters (per school year), I could get it done quickly. It was a perfect fit for me." "I love the atmosphere at Walsh, and the quality of education we both received," added Rebecca, who once worked at Walsh as the manager of Alumni and Annual Giving.

From the classroom to the altar, and from students in search of MBAs to the formation of "Team Hepner," Kevin and Rebecca found each other, and their futures, at Walsh College.